What we’ll be drinking this Easter

As various digital calendars and mobiles start beeping with various messages (mine has been firing off various reminders about the end of school term, Easter eggs and paying caravan site fees) there’s clearly no avoiding the fact Easter will be with us sooner rather than later. Well, later this year with the actual main event is happening late April, I know it’s literally a moveable feast that’s connected with phases of the moon but I strongly suspect the Yapp staff are thinking more Spring than Winter when I’ve asked around the hallowed halls of Yapp HQ. 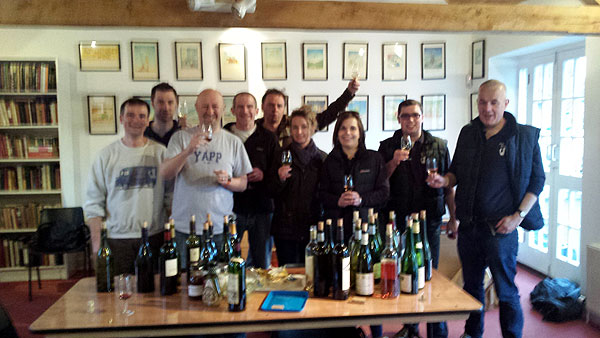 Bianca is planning on staying put this year with her young family (as she said, ‘holidaying in Gillingham-sur-mer’) but with plans for a family BBQ focussing on king prawns the ever reliable and stylish Provençal Bandol Mas de la Rouvière Rosé 2013 rosé will be served to all assembled.

Bordeaux Supérieur: Château d'Abzac 2010 with roasted Lamb for Easter Sunday lunch with family is the plan from Sebastian. Chosen, he says, because you need a well grounded red with decent tannin structure, good fruit and a finish that can endure as long as the lamb. This well balanced claret will stand up to the robust flavours of the lamb, but not overpower it in the process.

Richard, our irrepressible web guru is keeping his option well and truly open on his trip to meet up with parents back on his old stomping ground of Kent. Along with routine children's travelling paraphernalia he’s packing some Gigondas: Domaine Saint Gayan 2010, and a rosé, possibly the Costières de Nîmes: Château Roubaud Rosé 2013. The schedule roughly being, a red for the roast lunch or a rosé if the weather is good enough to have a barbecue outdoors instead (fingers crossed for the weather, not that his Mother’s roasts are apparently anything other than superb!). He’s also got plan C up his sleeve - a bottle of Tandem: Syrah Du Maroc 2010 in case the recent sand storms from the Sahara turn the back garden into a Kentish version of Morocco.

Tom, always slightly left field at this time of year, will be serving fish rather than meat. He’s a big fan of escabèche – fried fish chunks marinated and cooled in a spicy, vinegar sauce. Rick Stein has a good mackerel escabèche recipe, but he’ll be trying a Peruvian version from ‘Ceviche’ that partners the dish with sweet potatoes, boiled eggs and corn. The proposed wine match will be the new vintage of Cassis: Clos Sainte Magdeleine Rosé 2013, hoping the weather plays ball!

Our ‘legendary’ shop manager Meirion will be ‘taking the sea air’ in Cornwall and is planning on being at the beach in Rock and, as long as he remembers to take a cork screw, plans to be drinking the unoaked Chablis: Domaine Christophe Camu 2012 – with some seafood that’s yet to be decided on.

Meanwhile, I’m going to be on a coast somewhere (either Sidmouth or North Wales, we’re still working on various domestic logistics) but my wife's birthday dictates the packing of some fizz. So, some ‘his and hers’ will need to be packed – Julie is an avid fan and practically evangelical about the Vouvray Mousseux Brut, that’s consistently reliable but is better than ever in the current bottling. I’ll follow suit with a bottle of Saint Péray Mousseux Brut: Domaine Biguet – made from pure Marsanne that is bottle-fermented in the méthode traditionelle. If it was good enough for Napoleon...

So wherever you are planning to be this Easter we’d like to think we have a wine that will add to your gathering – Happy Easter!