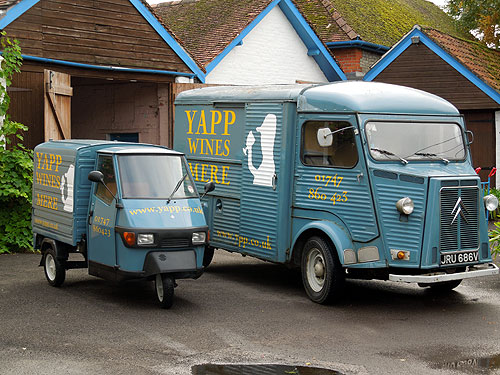 About 7 years ago we ‘won’ a beautiful old Citroën H-van on e-Bay, as the menfolk here at Yapp Brothers like to perceive such acquisitions. It had served out its days on a vineyard in Saint-Nicolas-de-Bourgeuil in the Loire valley so we felt that the convergence of the twain was providential. Of course, we couldn’t resist bedecking it in Yapp Brothers ‘Charles de Gaulle’ livery and it is now a much loved sight around Mere and its environs. Inevitably a 34 year-old vehicle requires quite a bit of love and attention to stay road worthy so from time to time we are deprived of its company when it goes off for maintenance. These absences can be quite prolonged as spare parts are fiendishly difficult to source. We’re in the market for a wing mirror if anyone has one lurking at the back of their garage! 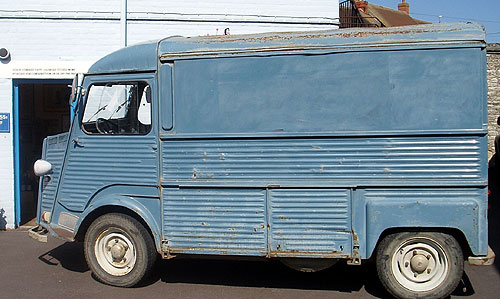 Partners of cyclists and motor enthusiasts will probably have guessed where we are heading here. 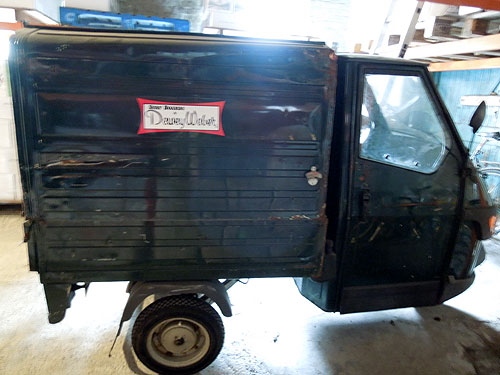 Sooo. It seemed foolish not to scan the far horizon for a bargain vehicle to stand in for the H-van when it is off the road. Thus it was we ‘discovered’ a lovely Piaggio ‘Apé’ lurking, neglected in the New Forest. It was missing a gear cable and was painted a rather gloomy forest green but it was a veritable bargain. It has now been mended, taxed and MOTed, had the bumps knocked out of it and been re-sprayed by the trusty 2CV Shop in Sutton Veny and been given a make-over by Kennet Sign and Display of Devizes.

You must concede that it looks happier for the pampering and adds a certain Italian sprezzatura to our rather Gallic courtyard.

The only trouble is what if the H-van and the Apé both need fixing at the same time?